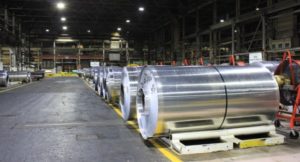 November 2018:Four U.S. senators, including West Virginia’s Shelley Moore Capito, are urging President Donald Trump to designate parts of Appalachia as an aerospace corridor.
The Appalachian Sky initiative, backed by American Electric Power and its regional partners, is aimed at attracting aerospace and aviation companies — as well as related partners — to central Appalachian. The designated region includes parts of eastern Kentucky, southwestern Ohio and western West Virginia. In terms of the Mountain State, the designation would affect Wayne, Cabell, Mason and Jackson counties.
Fourteen of the 19 counties are “AeroReady,” and five counties are expected to be certified by the end of this year.

Jackson County has been awarded the AeroReady certification. AEROready™ certification involves a deep analysis of items to ensure that regions, site and communities certified reduce risks for potential aerospace companies. Jackson County’s certification validates the property as ready for an aerospace industry, that there is a supply of labor and opportunity, and that necessary infrastructure is in place.

The Constellium aluminum plant in Ravenswood stands to benefit from a new contract with Boeing. Constellium’s national operation announced Tuesday that it has signed a multi-year contract with The Boeing Company to support its commercial airplane programs. Under the new agreement, Constellium will supply Boeing with a broad range of advanced aluminium rolled products coming mostly from its plant in Ravenswood, Jackson County.
“This new contract reflects the strong relationship established over the years with Boeing,” stated Ingrid Joerg, president of Constellium’s Aerospace and Transportation business unit. “We look forward to continuing to support Boeing in its commercial airplane programs.”

Constellium’s plant in Jackson County already supplies metal for Boeing and Airbus. Workers proudly say more than 20 percent of the aluminum on any plane is made there.